So, You Want to Write for Organ?

As an organist, I’m asked questions about how to effectively write for the instrument.  Many times, competent composers have shown me finalized movements, or long excerpts of compositions, hoping there will be little that requires change.  Though these pieces may be extremely effective, were they intended for the piano, they often require major revision to be as effective on the organ.  Even a composer as experienced as Arnold Schoenberg needed the help of Carl Weinrich, a professional organist, to create a playable edition of his Variations on a Recitative for Organ.  (Schoenberg’s original version, literally unplayable as written, is still available from Belmont Music Publishers for organists daring enough to create their own editions!)
But what makes writing for the organ so difficult?

The organ is not a piano.  This is something many musicians, because they’ve never sat at an organ console, tend to overlook.  That said, most of the problems that arise in organ writing are purely technical.  There’s no sustain pedal, so a passage like the following, dependent upon the harmonic accumulation of notes, is not possible: 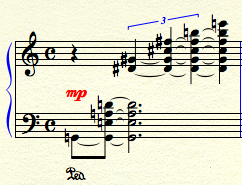 If the pedals are not allowed to assist, or are absent or occupied, only select notes from the above passage will be able to be sustained.  This compromises the intended effect of the gradually-acquired, full harmony, and gives the passage an entirely different character.  The selection below is one of many possible realizations: 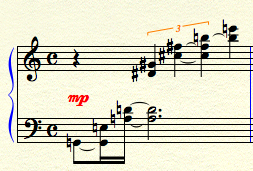 Passages involving seamless legato leaps, very well executed by use of the piano’s sustain pedal, will sound choppy on the organ, no matter how quickly the organist hops from chord to chord.  The same is true of extensive octave passages in either hand.  To make this apparent, all a composer needs to do is attempt to play a Beethoven piano sonata on the organ; the differences between the two instruments, including the number of keys per keyboard, will be made embarrassingly clear.

Unlike the piano, dynamics on the organ cannot be achieved by altering one’s touch.  Unless the registration of a manual (keyboard) is changed in real time, intended loud and soft passages played on it will sound at the same dynamic level.  For this reason, dynamic contrasts are frequently achieved by switching manuals.

Unlike a piano, where sustained notes naturally decrescendo according to the order in and velocity with which they are struck, notes on the organ do not.  Therefore, dissonant chords derived from the accumulation of notes will sound more fearsome on the organ than on the piano.   Though organ literature is ripe with dissonances, it is worth understanding that a passage like the following will sound much less dissonant on the piano:

While it is true that some organs have expression pedals designed to adjust the instrument’s volume, these pedals impact all held notes on a particular manual.  It is also worth noting that the availability and use of such expression pedals varies from organ to organ.  Some players, because of instrumental limitations, cannot even execute the mildest crescendi and decrescendi, let alone excessive dynamic swells.  If such expression is desired, it is worth remembering that these pedals are operated by the feet.  Therefore, assigning a pedal note to each foot while notating an expressive crescendo is not wise.  Though there are instances in contemporary scores where this can be done with great awkwardness, many composers today seem to be fixated on “extended techniques” for their own sake, thus making pieces more difficult than necessary.  With a complex instrument like the organ, one that has so many timbral possibilities at hand, it is advised that such exploration be commenced only after thorough knowledge of what the instrument can achieve is gained. 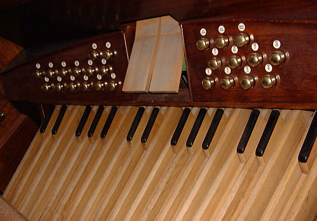 My friend, the late Daniel Pinkham, once remarked that composers don’t realize that the majority of performance mishaps occur because of pedal writing.  I heartily agree.  Examining the organ works of masters like Bach and Buxtehude, notice how the manual parts become easier as the pedals become more difficult.  Also, note how frequently the pedals rest during a given work.  Too many composers think that, because the pedal is given its own staff, a continuously-active pedal part is necessary; it is not, and simplifying the demands of the pedal will often improve the performance of many new works.
Take your body’s balance into consideration, too.  Attempt to play some of your own passages with both hands and feet.  See if you can easily balance on the organ bench.  Whatever is awkward, sending you jolting forward or backward, is not ideal.  Charles Ives, an organist keenly aware of such issues, wrote below a difficult pedal passage in his fifth variation from Variations on America, “This passage was often played by the pedals while the left hand hung on to the bench.”

While this blog post did not cover registration, the organ equivalent of orchestration, registral matters are often of secondary concern when technical difficulties stemming from unidiomatic writing are paramount.  Taking the time to sit at an organ and attempting to play with hands and feet together is the best education for any composer who wishes to write for it.  And while you’re at the console, refer to Sandra Soderlund’s A Guide to the Pipe Organ for Composers and Others.  (Daniel Pinkham used to refer this guide to composers.)  Inside this comprehensive, little book, you’ll find all the basics a composer needs to know to start writing effectively for the instrument.  When in doubt, ask an organist.  Better yet, let an organist direct you to an empty organ bench!  Happy pedaling!
Posted by Doctor Matt at 11:07 AM