In his 12-tone and serial works from 1960 onward, Igor Stravinsky (1882-1971) often employed a method of material transformation that utilized rotational arrays.  Known by several names, including what Milton Babbitt called “hexachordal transposition-rotation,” Stravinsky’s method of generating pitch-class (note) successions was actually developed almost two decades earlier by composer Ernst Krenek (1900-1991);  in 1941, it makes an appearance in Krenek’s choral work Lamentatio Jeremiae Prophetae.  The procedure is simple, and can be used for numerous compositional purposes in both 12 and non 12-tone worlds.  While Stravinsky and Krenek used sets consisting of 6 differing pitch classes (hexachords), there’s no reason why sets with more or fewer members can’t be used.  Here are the four simple steps to create your own transposed rotational arrays:

Create a series of pitch classes.

Rotate it, making the first element become the last.

Transpose the new set so that its starting pitch class is the same as that of the original set. 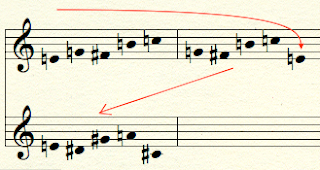 Repeat  the process for the remaining sets.

Compositionally, sets can be used one after the other in an ordered or unordered fashion.

Used in this manner, the frequency of a repeated pitch class (and, potentially, more that repeat), is ideal for situations requiring pitch centricity.  Choral works, for example, and more “melodic” passages easily benefit.

Sets can be assigned to various instruments to create multiple parts.

Sets may even be deduced from already-present melodic fragments, or created with pitch-class repetitions.

Often dubbed “Stravinsky verticals” when applied as follows, sets can be used harmonically, too.  Instead of reading the sets left to right, read them one by one from the top down or bottom up.  They can be expressed this way as chords.  Because resulting octaves have a real intervallic function, they are permissible in such situations, even in 12-tone music.
Although Stravinsky liked to represent the duplicated “notes” of the first pitch class of a set by a single tone, it is also possible to compose a multi-octave representation.

With a little creative thought, the possibilities are endless, no matter the idiom in which you compose.  By writing out several such transformations, and playing them over on an instrument for sonic reinforcement, you’ll soon be able to mentally “hear” all such transformational possibilities inherent in any pitch succession.  With practice, you’ll be able to fluently maneuver between sets at your disgression without relying on charts, which greatly speeds up the process of composition.  Because the ear is king, it is my conviction that the results of any musical procedure should only be used if they satisfy its dictates.  Use these techniques to best fulfill your own musical vision.
Posted by Doctor Matt at 10:45 AM